The spacecraft represents the first of its next-generation SpaceShip III class of vehicles.

The rollout of VSS Imagine gives the space tourism company a second spacecraft to begin testing, as Virgin Galactic continues to work through final development testing of VSS Unity, with its next spaceflight test expected in May.

Interviewed by CNBC, Virgin Galactic CEO Michael Colglazier told viewers: “For us to make the business start to scale, at the places that we’re aspiring towards, we need two things: We need many more ships than we have right now and we also need the ships that we bring forward to be built in a way that they’re able to be maintained in a way that we can have much quicker [turnaround times between flights] than what we have with Unity,” .

VSS Imagine is the third spacecraft the company has built,.

The VSS Enterprise was destroyed in a fatal test flight accident in 2014, while the VSS Unity has flown two spaceflights, most recently in February 2019.

Virgins’ Colglazier emphasized that VSS Imagine “has been designed in a way that’s taken the learning we’ve had from all the flight testing on Unity.”

“That allows us to access things in the right way — we know what things need to be tackled on a routine basis, so that we can give people easy access,” Colglazier said.

Colglazier said the VSS Imagine is the first of the company’s SpaceShip III generation.

The biggest improvement between the SpaceShip II and SpaceShip III classes is that SpaceShip III has been designed with a more “modular” approach than the previous generation, improving turnaround time, both in terms of manufacturing each spacecraft and the amount of maintenance needed between each flight.

Where as VSS Unity “was basically built in place,” which is “a slower process.”

Virgin Galactic President Mike Moses defined the “modular” advances of VSS Imagine as breaking production down into sections: “The fuselage, cabin, the wing body, the flat plane form of the wings, and then the tail booms – all were built separately.”

The company has yet to identify how many SpaceShip III vehicles it plans to build, but Coglazier said more spacecraft will be needed to fulfill the company’s demand backlog.

Whilst SpaceShip III features a variety of improvements, Virgin say it is still “a fairly handcrafted piece,” and manufacturing does not yet have production level tooling.

Virgin Galactic has created a new internal program called the Delta class, which the company is designing with the goal of being able to “build spaceships in parallel.”

While the Delta class will functionally be the same as the SpaceShip III vehicles, Virgin say the Deltas are where they scale on the manufacturing front.

Virgin Galactic believes it is likely Virgin Galactic could “find some great partnerships” among aerospace companies to build the next carrier aircraft, as opposed to the company building its own dedicated assembly factory.

The government opens up aerospace innovation

Virgin Galactic believes that the U.S. government has opened up markets for space, making a pathway for commercial businesses to come in and bring a degree of innovation that probably didn’t exist before.

Moreover, we are now seeing technology coming to where innovation and entrepreneurial focus is able to find more and more opportunities.

These factors are combining with a good capital market environment to create a growth industry here that didn’t exist just a few years ago.

Space is back in the consumer mind. 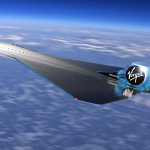